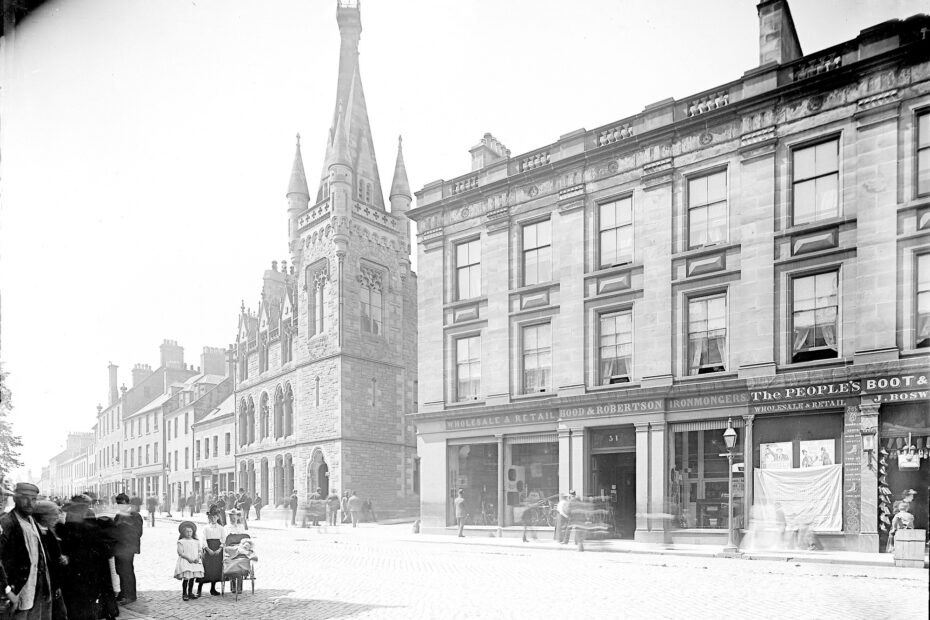 In 1867, Miss Elizabeth Duncan of Edengrove left £5000 (worth about £590,222 today) for the building of a “Mechanic’s Institute” in Cupar. These institutes were the response to an increased interest in education, and served to provide lectures and classes in science, technology, and access to books for the working classes. They already existed in Edinburgh and Glasgow, and the Duncan Institute was established for the workers of Cupar, Dairsie and Kilconquhar parishes.

Extract from the Will of Miss Duncan

A competition was held to choose the best design, the brief was to be as ornamental to the town of Cupar as possible and to be within a certain budget. Five designs made it to the final and these were available to view in the Corn Exchange. The winning entry was from Mr John Milne of St Andrews, an architect with a fondness for the Gothic. His design was seen as ‘an embellishment to the town’ and a ‘great improvement to the locality’.

The building was erected on the site of the Railway Tavern, and officially opened on 13th December, 1870. It was of Scottish baronial style, with turrets, grotesques, stained-glass rondels, different window styles on each floor, and a 114 ft. twisted “broach” spire. The spire was soon reduced to 111 ft. During a storm in January 1874, strong gales knocked 3 feet off the top!

The Institute originally comprised two reading rooms, a library, a recreational room, a lecture hall, a museum and a billiard room. There was also accommodation for the caretaker. In 1872 a telegraph service was introduced to relay important events to the reading room. There were lectures on Chemistry; Plants; Astronomy; the “six days of creation” and even one on “The Gothenberg Licensing System” under the auspices of the Temperance Society.

The building continued to be well used, and was administered by the Trustees until 1972 when it was acquired by Fife County Council. A room on the ground floor had been used as a library for some years, but the Council had a grand plan for a £50,000 refurbishment. Extensive reconstruction work would be carried out, and the ground floor gutted and remodelled to create “a modern, spacious lending library and meeting centre”.

In 1975 Cupar library – or the Duncan Library to give it the official name – opened its doors, and is a vital part of the town to this day. In addition to books (fiction, non-fiction, children’s, young adults, adults, talking books, large print, EBooks), there are public access computers, a meeting room, and craft, Bookbug and WalkOn sessions. The Local Studies room – the Duncan Room – houses local and family history records, reference material, a photographic and newspaper archive and many other resources.

After nearly 150 years, this iconic building still serves the people of Cupar, Dairsie and surrounding parishes in a way that would surely have pleased Miss Elizabeth Duncan. Although I suspect that the inhabitants of Kilconquhar probably go elsewhere these days.