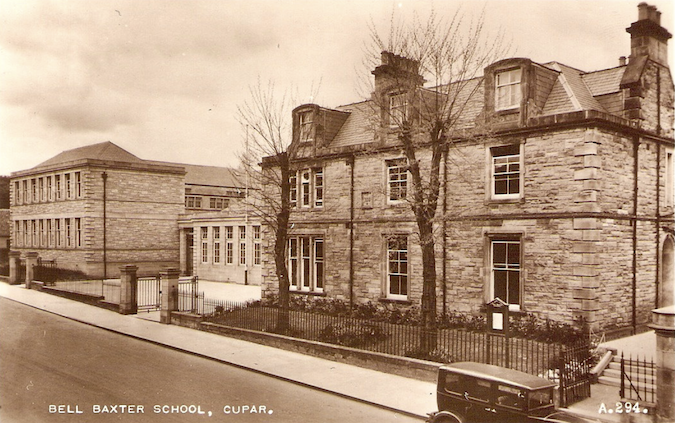 Bell Baxter High School occupied this building at West Port from 1890, with additional facilities added in 1929.

The school moved to a single site at Carslogie Road and the buildings illustrated were partially demolished, or converted to housing and offices. The railings and gate were most likely removed for metal salvage during WW2 and the tree on the right has been removed.

Many will know that Bell Baxter High School began its first session in 1889, but although the name was new, in effect the school superseded the Madras Academy, the origins of which can be traced back to the old grammar school of the Burgh of Cupar. Bell Baxter was an amalgamation of the Madras Academy and Sir David Baxter’s Institute for Young Ladies.

In the early 1960s, the old Westport site (above) was bursting at the seams with numerous wooden huts in use. We’re sure some of our readers will have tales to tell. The school’s current Carslogie Road site opened in 1962 and for the next 48 years, the school’s campus was split across the two sites.